Milwaukee’s Asian American community dates back to 1880 when the census for that year recorded two Chinese residents. It quickly grew to an estimated 60 by 1889 with 28 Chinese hand laundries listed in the 1888 City Directory. Many of them escaped anti-Chinese riots plaguing Western states that killed dozens of Chinese after the Civil War. While many settled in segregated Chinatowns east of the Rockies in Chicago, New York and Boston, Chinese residents were scattered throughout Milwaukee.

In March 1889, two Chinese men were accused of raping more than 20 elementary school-age white girls and went on trial. Anti-Chinese rioting broke out March 11th-12th, 1889, and 75% of Milwaukee’s Chinese community fled to Chicago and elsewhere. Only 14 Chinese were recorded in the 1890 Census and the number of Chinese hand laundries dwindled to 11 in the 1891 City Directory. Decades of restrictive immigration laws, the Chinese Exclusion Act of 1882, U.S.-Japan Gentleman's Agreement of 1907, Immigration Act of 1917 (Asiatic Barred Zone), and Tydings-McDuffie Act of 1934 kept the Asian American population very small in Milwaukee and the United States for almost a century until ethnic and race-based immigration barriers ended in 1965.

It took several generations for Asian Americans to start overcoming barriers to pursue the American Dream. Milwaukee has had two city planners of Asian American descent.

The first was Vincent Lung. He came to Milwaukee as a planner in the Public Land Commission in 1955, promoted to chief of the advance planning section in 1957 and became City Planner in 1961. He reflected post-war urban planning, focusing on how to move traffic in and around the city and Downtown. He helped shape plans for one-way streets that would serve as feeders to Downtown expressway ramps, MacArthur Square underground garage and Kilbourn tunnel expressway ramps, parking garages for 30,000 cars, expansion of the Milwaukee Vocational School (MATC) and MSOE campuses, a union station (Intermodal) for the Milwaukee Road, Chicago & North Western, and North Shore Line (abandoned in 1963) trains and interurbans, and never-built heliports on skyscraper rooftops. Another accomplishment was modernizing zoning codes. He left Milwaukee in 1964 to become the assistant city manager and city planner for rapidly growing Tucson. Unfortunately, he developed leukemia and died prematurely at 39 in 1966. 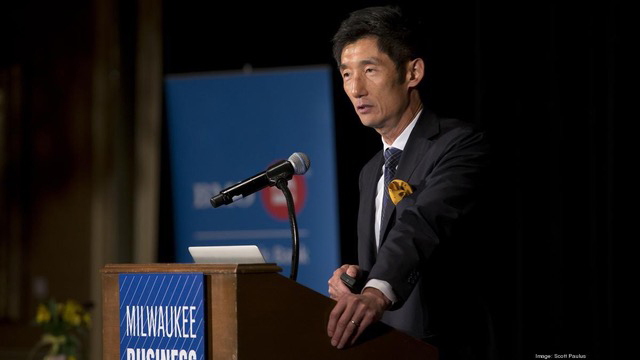 Three decades later, Peter Park was a professor at the UWM School of Architecture and Urban Planning. He asked his graduate students what could be done when the elevated Downtown section of I-794 reached the end of its lifespan. He and the class proposed replacing it with a boulevard inspired by San Francisco replacing the earthquake-damaged Embarcadero Freeway with a boulevard. He didn’t realize when the Milwaukee County Expressway Commission planned I-794 in the late-1950s, Lung and the Public Land Commission proposed substituting a boulevard. Even though I-794 was rebuilt rather than replaced, then-Mayor John Norquist was impressed by the proposal that he appointed Park as City Planner in 1995.

Norquist and Park believed much of post-war urban planning practiced by Lung and New York “Master Builder” Robert Moses favored cars and expressways over pedestrians and transit, sped the flight of people and businesses from Downtown and streetcar neighborhoods, and fueled sprawl and gridlock.

Park's goal was development with a thriving street life accessible by foot and transit as well as cars. He planned the redevelopment of the abandoned Milwaukee Road Beerline as a new neighborhood of condos on Commerce St. and encouraged new development to face the street and sidewalk rather than a parking lot. To reconnect the city, he pushed for a new 6th St. Viaduct descending to the Menomonee Valley that spurred its revitalization and replacing the Park East Freeway stub that was a barrier between Downtown and north side with a boulevard. He and Norquist started the Mayor's Design Awards to recognize and encourage good architectural and urban design.

When Norquist left office in January 2004, Park left to become Denver’s planning director. He is currently a consultant on urban planning around the country and abroad and teaches urban design at University of Colorado Denver.