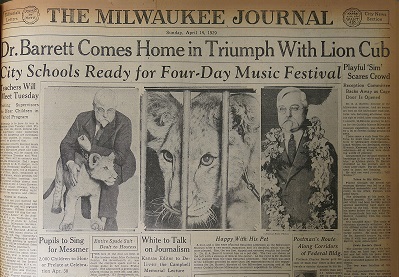 Way before an animated Simba the lion would inherit everything the light touches, there was a Simba the lion who lived in what is now our Central Library building. Simba was purchased by an expedition to Africa mounted by the Milwaukee Public Museum (which at the time still shared the building with the library) back in 1928. He’d arrive in Milwaukee in 1929, where he’d move into his temporary home in the Taxidermy department of the Museum. It was a bad omen, in some ways, as it foreshadowed Simba’s eventual fate. It wasn’t too bad of a home for the little lion, though. He enjoyed a diet of meat and water mixed with milk. He happily played about on the fourth floor and the roof, and even had a favorite toy in the form of a wooden bowling ball. This bowling ball, however, would prove dastardly. 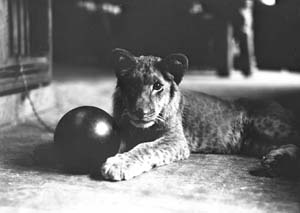 Pictured Above: Little Sim and His Arch-Nemesis

You see, poor Simba hurt himself on that blasted ball, causing two dental abscesses. Thanks to this dental emergency, he was moved much sooner than originally planned to the Washington Park Zoo (as they’d already intended to move him once he got too big for the museum). There, he found himself losing his name – for you see, the zoo already had a young lion named Simba. Simba, as it turns out, is simply the Swahili word for ‘Lion’. It’s like naming your baby boy ‘Boy’, or your cat ‘Cat’. So, when faced with the dilemma of two Simbas, our Museum/Library dweller would officially be renamed ‘Sim’, to match the nickname he’d had his whole life (in fact, most newspaper articles from that time solely referred to him as ‘Sim’).

Sim’s life at the zoo lasted fourteen years, before he eventually was euthanized due to debilitating, disabling pain from his teeth. Sim would then be stuffed and mounted by museum taxidermist Walter Pelzer and put on display in the public museum, in the room that now houses the library’s Humanities department. It was a strange twist of fate, this being his return to the building after having lived on the fourth floor in the taxidermy department.

These days, you can see Sim over in the Public Museum in the Africa exhibit on the third floor. For this Simba, his circle of life was pretty unique.  For more information you can check out some books on Simba, such as Samson & Sambo, Simba & Timba: Behind the Dioramas or Timba, Simba, and Sambo, or even African Horizons by John Cudahy, about the original expedition.

Now before I finish this up, I better address the pressing issue about whether or not it’s proper to call Sim the ‘library lion’ like I do in the blog title. While calling him by that moniker is perhaps presumptive, ‘the museum lion who lived in the building that at the time housed both the library and the museum but now is just the library’ doesn’t quite have the same ring, does it? So sorry, Milwaukee Public Museum, you moved out, we’re still here, we get to call him the library lion now. It’s a subsection of the ‘finders keepers law’ that is codified in the Wisconsin State Statutes, just under the part for ‘no take-backsies’ and above the regulations of ‘calling dibbs’ (note: this is complete nonsense and illustrates exactly why you shouldn’t ask librarians for legal or tax advice).

Stay tuned for next week’s trip through Milwaukee’s Menagerie, when we’ll talk about good old Gertie the Duck!