The Library That Became a Department Store 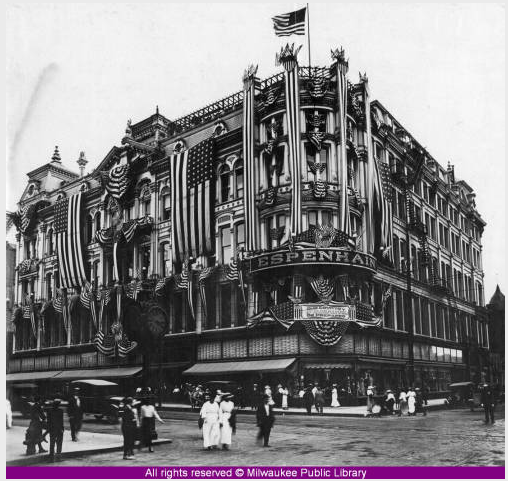 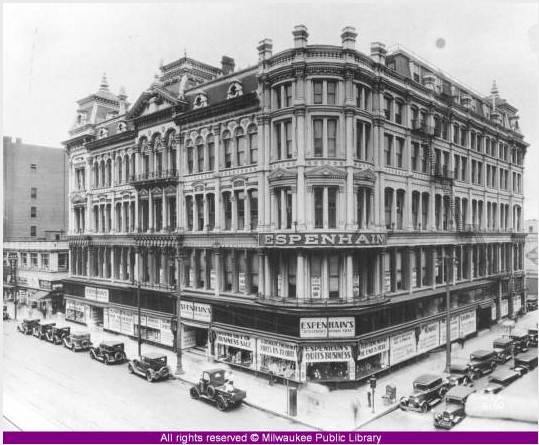 The Library That Became a Department Store

Historian John Gurda wrote in his Sunday Milwaukee Journal Sentinel column about how the former Hill’s Department Store was renovated to become the new Mitchell Street Branch of the Milwaukee Public Library, which will open on Saturday at 10 am. The new branch is located on street level with apartments above.

More than a century ago, a former home of the Central Library became a department store. In 1880, the ornate Library Block building opened at the northwest corner of 4th and Grand Avenue (renamed Wisconsin Avenue in 1926) with retail on the 1st floor and the two-year old Milwaukee Public Library moved onto the 2nd floor. By the end of the decade, both the Library and Milwaukee Public Museum, then housed in the flamboyant Exposition Building, were both running out of space and needed bigger quarters.

The City of Milwaukee responded by opening the Library-Museum Building (Central Library) for both institutions in 1898.

Meanwhile, James L. Bartel opened a dry goods store in Lipps Hall at the corner of 3rd and Prairie (renamed Highland in 1926) in 1879. When Frank C. Espenhain became a stockholder, the store name changed from James L. Bartel Co. to West Side Dry Goods Bazar (sic) to Espenhain and Bartels in quick succession.

Espenhain crossed the river back to the west side of Downtown into the five-story Library Block Building, kitty-corner from Boston Store, in 1906. Son Frank K. Espenhain sold the financially struggling department store to Boston Store merchandise manager Albert Ellinger in 1913. His wife, Flora, took over after he died in 1918.

George Rigas operated Espenhain's restaurant during the Roaring Twenties after running the Rigas Candy Shop in Downtown during the Teens. He would later manage a restaurant in Hill's Department Store (Mitchell Street Branch) in the 1930s.

The 1927 volume of The Milwaukee Journal Consumer Analysis of the Greater Milwaukee Market showed Espenhain's significantly trailing its competitors, Schuster’s (3 stores), Boston Store and Gimbels in department store market share for appliances, clothing and furniture. Even though The Journal didn't ask consumers which department store they primarily shopped at, the market shares for bed springs was a snapshot of the Milwaukee' market. Schuster’s led the field with a 41.5% share followed by Boston Store (27.2%), Gimbels (20.4%), Espenhain's (6.8%) and Lion Store (2.7%), the original occupant of the new Mitchell Street Branch.

There were two factors for Schuster's lead. First, despite not having a downtown location, Schuster’s had three stores, while their competitors were only single stores (Gimbels and Boston Store had stores in other cities). Second, Schuster’s stores were located on neighborhood shopping streets. Their six-story, 470,000 square-foot 3rd St. flagship store anchored the north side's Upper 3rd St. retail district, which was second only to Downtown, and their Mitchell St. store anchored the Mitchell St. retail district, which ranked third behind Downtown and Upper 3rd before shopping centers changed shopping habits in post-war Milwaukee.

The J. H. Mack chain decided to cut their losses and closed Espenhain's in 1932. Roxie's, a women's clothing store moved in and Old Man Depression licked it too. The vacant, grand old building was razed in 1935 and a mundane-looking two-story J. C. Penney department store was built that would be replaced by the Midwest Express Center (Wisconsin Center) in 1998.