Edmund Heller was appointed zoo director in 1928. His degree was in zoology, but his previous professional experience was as a mammal naturalist for museums and expeditions, including the 1909-1910 Smithsonian-Roosevelt African Expedition, led by former President Theodore Roosevelt. 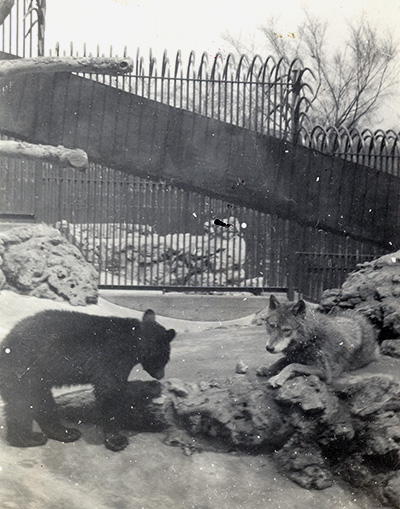 ​Influenced by Heinrich Hagenbeck’s experiment of putting different animal species in the same enclosures to partially simulate nature at the Tierpark zoo in Hamburg, Germany, Heller placed black, grizzly and polar bears with wolves in a shared enclosure in 1929. For three years, seemingly peaceful coexistence among the carnivorous captives made the den a showplace of the free 23-acre zoo for Milwaukeeans trying to forget the Great Depression for a few hours.

A grizzly snatched the carcass and began to disembowel it in front of shocked spectators. The other grizzlies, polar bears and wolves tried to snatch a bite. Nearby, Venice the elephant smelled blood and trumpeted her trunk in distress.

Zookeepers struggled to drive the bears away with a water hose. They threw a rope around the lifeless body, but it broke. With a stronger rope, they pulled the carcass down into the moat away from the shared den’s denizens. The Fire Department arrived and removed the mutilated carcass with grappling hooks.

After returning from out-of-town, Heller asserted that the black bear’s death was not malicious, but a “playful accident” and “won’t happen again in a million years." Then he whinged “We don’t want the firemen and we don’t need their help.”

Tragedy struck again nine months later on July 21st, 1933. Another polar bear cub knocked a black bear named Jerry into the pool and held his head under water with his paw. Heller and zoo attendants quickly responded to zoo visitors yelling for help. It took time to drive the bears and wolves into separate cages before they could pull lifeless Jerry out of the pool with poles. Heller said black bears would “become educated” that it is “dangerous to hang around” the pool with polar bears nearby.

Only a month later on August 23rd, 1933, the polar bears struck again. They shoved another black bear into the pool and prevented it from escaping before they started to eat it. Since this happened before opening time, it took time before zookeepers arrived at work to lure the bears away with food and water hoses. They pulled the carcass out of the pool with pikes.

When Heller returned from out-of-town, he was remarkably tone-deaf to public reaction. He repeated that playfulness caused the drownings. The Milwaukee Journal wryly observed the third black bear victim was “educated” by polar bears and asked how many black bears were left? Newspapers around the country carried wire service articles about the three drownings.

Finally, the black bears were moved out of the shared den. The fleet-footed wolves remained with the polars and grizzlies. A lion and bear continued to share another den, because they were raised together.

Washington Park and its zoo were part of a separate City of Milwaukee park system before the City and Milwaukee County park systems consolidated in 1937. Charles  Schneider, president of the City’s Board of Park Commissioners said the Park Board would discuss asking Heller to resign. Taking its cue from Heller giving polar bears another chance, they censured, but did not sack him.

Living in separate cages should have prevented polar bears from attacking black bears, but it didn’t on April 27th, 1935. A black bear cub stuck his paw through the cage bar and Greely the Killer Polar Bear (newspapers misidentified him as a black bear), who previously killed his sister Niobe, ripped his leg off. Zookeepers moved the grievously-injured cub to the basement.

A zoo goer called the Wisconsin Humane Society. They sent an agent to investigate and found first aid was given, but no veterinarian was called. Zoo attendants explained only Heller could authorize it, but he was on vacation. Heller returned the following day and the traumatized cub was finally put out of its excruciating painful misery by gas. When asked why a vet wasn’t called, he replied “A veterinarian can’t replace a leg.”

Two months later, Heller left to become director of Fleishhacker Zoo (San Francisco Zoo), where he spearheaded the construction of the barless polar bear grotto. Hundreds of spectators watched in terrified disbelief as Big Bill killed his mate Min during the dedication ceremony.

Another black bear cub climbed the cage wire on June 7th, 1936. A polar bear snarled, reached up and plunged his fangs into the cub’s leg, whose shrieks were heard a block away. 17 year-old Ross Sevener grabbed a broom, jumped over the railing and started hitting the polar bear through the bars. His father yelled at him to jump back over the railing. They ran to find help. By the time they returned with zookeepers, the cub’s leg was already severed. The attendants drove the polar bear away with a water hose and shot the cub.

New zoo director Ernst Untermann shared Heller’s PR sensibility when he said “I hope the papers won’t make much of it; just one of those things that happen around a zoo every so often.”

In 1960, the bears were moved to the 200-acre new zoo (Milwaukee County Zoo) at W. Blue Mound Rd. and N. Barnekow Ave. (road vacated for parking lot and Zoo Interchange) and the bear dens were razed for the Northwest Expressway (renamed Stadium Freeway in 1964). To get an idea of what the Washington Park Zoo might have looked today had it not moved, visit the Lincoln Park Zoo in Chicago.