MPL Resources Add to a Celebration of Pride Month


Historical photos, books, and music at your Milwaukee Public Library can enhance your Pride Month experience. Read about the history of LGBTQ+ in the U.S. and Milwaukee, see historical photos, then browse booklists for all ages while listening to a playlist in Freegal developed specifically for Pride Month.

The 2016 book LGBT Milwaukee by Michail Takach is believed to be the first comprehensive history of LGBTQ+ life in Milwaukee. It contains a foreword by Don Schwab of the Wisconsin LGBT History Project, a website that holds over 100 years of historical records – one of the largest for a geographical area nationwide! The book traces gathering places, landmark bars, and pride celebrations. Recent books by R. Richard Wagner document pre- and post-Stonewall activism in Wisconsin. 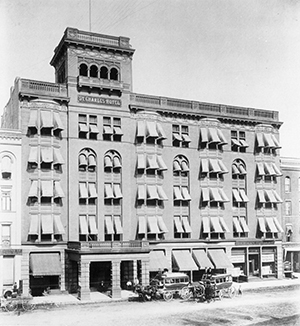 One of the first-ever documented gathering places for gays and lesbians was the St. Charles Hotel (pictured at left) due to its open and accepting atmosphere. It was located just south of City Hall and razed in 1932. 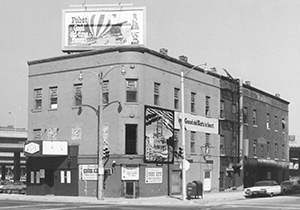 The River Queen was a legendary gay and drag bar that opened in 1960 and was one of several gay bars located within the building originally known as the Cross Keys Hotel (pictured at right). This bar is said to have attracted such national celebrities as Milton Berle, Paul Lynde, and Liberace (who was born and raised in the Milwaukee area). It was located at the corner of Water Street and St. Paul Avenue where the Milwaukee Public Market now sits. 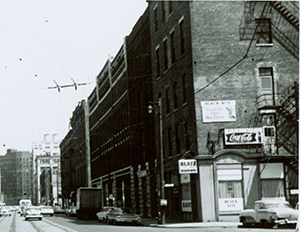 Pictured at left is the Black Nite bar circa 1961, one of Milwaukee’s most popular gay bars at the time and part of a small strip of gay bars on the 400 block of North Plankinton Avenue. On Saturday, August 5th of that year, 12 men stormed the bar in what would be later known as the Black Nite Brawl - Milwaukee’s first LGBTQ+ uprising. 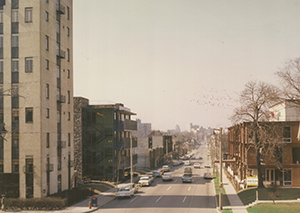 Eight years later, the Stonewall riots would bring the gay rights movement to national news and spawn the first organization for homosexual rights at UW-Milwaukee in 1970. The Gay Liberation Organization, later renamed Gay People’s Union, opened a venereal disease testing center on North Farwell Avenue (pictured at right). In 1982 this clinic moved to Brady Street which we know now today as the BESTD Clinic. UWM has continued to pioneer LGBTQ+ rights in Milwaukee; its LGBT studies certificate was the first of its kind in 1995.

Below are two documents from 1989. At the left is a flyer for the first pride parade and rally in Milwaukee. On the right is a proclamation from Milwaukee’s mayor at the time, John Norquist. 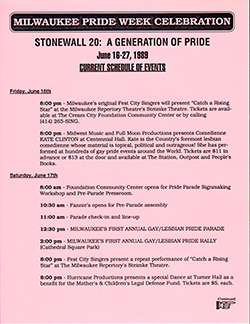