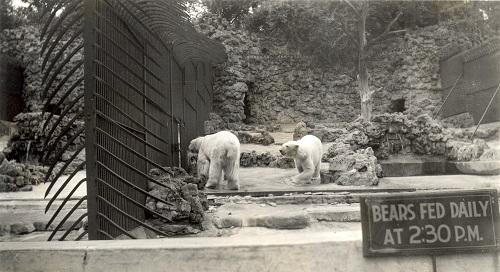 The Polar Bears at Washington Park Zoo, from MPL's own Historic Photo Collection

It’s time to take a brief detour from the uplifting, happy stories about the famous animals of Milwaukee, and delve into one of the bad apples in the orchard. His fur may have been white as snow, but in his chest beat the heart of an ice cold killer. His name was Greely, the most dastardly polar bear to ever set paw in Milwaukee. Full warning that this one is a little more gruesome than the other posts, in no small part because Greely was not the sort of bear they write children’s books about.

Greely was actually born in Milwaukee in 1921 alongside his twin sister Niobe.  The proud parents were Sultanna and Silver King, and I’ll let you guess which was the mother and which was the father. Greely was somewhat ominously named after Adolphus Greely, a famous polar explorer (seemingly apt for a bear of the also-polar variety). What makes that so ominous is that Greely’s polar expedition is infamous for having nineteen of its twenty-five crew members die of starvation, drowning, and hypothermia as two separate supply parties failed to reach the expedition. Adolphus even ordered the execution of one of the crew, as the man had been stealing what little food they had left. This was the pedigree of Greely’s name (though it should be said that Adolphus wasn’t a bad dude, just a man who went through an incredibly trying ordeal), so it shouldn’t have been all too surprising when Greely the bear would become Greely the Killer.

Greely’s first victim was his own sister, Niobe. It was mating season in July of 1930, and something inside Greely’s head must’ve snapped – he led an attack on poor Niobe that ended in her death. His next attack was in 1935, when a poor little black bear cub foolishly stuck a leg through the bars that separated the black bear and polar bear enclosures. Greely removed the trespassing appendage and kept it; the black bear cub didn’t survive the weekend without it.

The final victim to Greely’s bloodlust was Borealis, one of the eldest and most beloved polar bears in the zoo. Borealis was one of the four original polar bears brought into the zoo, alongside Sultanna and Silver King. You might even consider Borealis a sort of step-father to Greely, as Borealis had taken up with Sultanna after the death of Silver King, which makes his attack all the more mythic. It was 1939, and Greely led an attack with two of his siblings upon the elder Borealis like a white and furry version of the Titanomachy. Borealis was killed in that attack, not even really having a chance to defend himself. Thankfully, this was the last of Greely’s attacks, but he definitely earned the name ‘Greely the Killer’.

Greely’s life would come to an end just over a year later, as he was lured to the back of his cage by a trail of castor oil and shot by one of the zookeepers, not in punishment for his killings, but to euthanize him due to multiple incurable and terribly painful diseases. Greely isn’t brought up in the zoo history much, for understandable reasons. He was all kinds of mean and tempered, and contributed heavily to the amount of terrible bear murder at the Washington Park Zoo (but that’s a whole different story).

Join us again on the blog next week, and we’ll talk about Milwaukee's all-time great, the legendary Samson.  Thanks for reading!